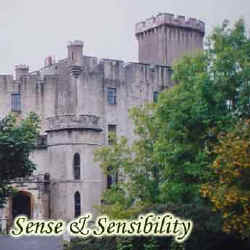 "Jane Austen can in fact get more drama out of morality than most other writers can get from shipwreck, battle, murder, or mayhem."
-- Ronald Blythe

Two sisters representing the traits of the title "Marianne, the slave to sensibility and Elinor, a woman of sense" manoeuver their ways through the pitfalls of society and romance.

Sense and Sensibility was not the first novel Jane Austen wrote, but it was the first published after a title and style change.

One of the best of many links to Jane Austen related sites is below ...
http://www.pemberley.com/janeinfo/janewrit.html

And notice the time it takes to narrate this unabridged version of Sense and Sensibility.  It is a high quality recording but requires only a single mp3 CD.  Conventional audio recordings would be either abridged or require many CDs or tapes.  An mp3 CD can store up to 18 hours of narration ~ most of the classic audiobooks available from Decklin's Domain are on a single CD and many have more than one story included. Most stories are also available on Thumbdrive or by direct download.