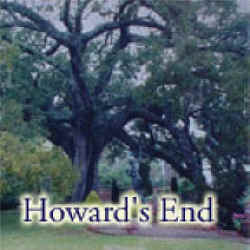 Howard's End is a novel by E. M. Forster, first published in 1910, about social conventions, codes of conduct and relationships in turn-of-the-century England. Howard's End is considered by some to be Forster's masterpiece.

The book was conceived in June 1908 and worked on throughout the following year, it was completed in July 1910. (From Wikipedia)