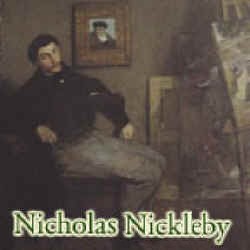 Charles Dickens novel Nicholas Nickleby (often mis-spelled Nicholas Nickelby) begins with the death of Nicholas' father who dies bankrupt. Shortly after, Nicholas, his sister Kate and his mother travel to London. In an effort to provide support for his mother and sister, Nicholas approaches his late father's brother, Ralph, and asks him for help. Ralph, a miser and moneylender, agrees to help them, but only on his terms. He would prefer to have nothing to do with his late brother's family. Ralph secures a position for Nicholas at Dotheboys Hall in Yorkshire as assistant to Wackford Squeers. Nicholas is immediately disgusted by the terrible conditions, but knows that in order for his sister and his mother to receive help from his uncle, he must endure the situation. However, when Nicholas catches Squeers unmercifully beating Smike, an older, mentally challenged boy, he can stand it no longer. Nicholas grabs the whip from Squeers and begins beating Squeers, and not Smike. Nicholas and Smike immediately leave the school and head toward London.

When they arrive in London, Nicholas contacts Newman Noggs, his uncle's clerk, who has promised to help Nicholas if necessary. It is Newman who helps clear Nicholas of the false charges brought on by Wackford Squeers, and also Ralph Nickleby who has accused him of being a thief. The life and adventures of Nicholas Nickleby continue in classic Charles Dickens tradition as the plot grows more complex, the descriptions more delicious, and the characters more comical.

Listen to the preface of Nicholas Nickleby...

Listen to chapter 1 of Nicholas Nickleby...