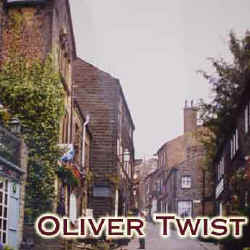 Dickens's classic morality tale of a starving orphan caught between opposing forces of good and evil is a powerful indictment of Victorian England's Poor Laws. Filled with dark humor and an unforgettable cast of characters - Oliver Twist, Fagin, Nancy, Bill Sykes, and the Artful Dodger, to name a few - Dickens's second novel is a compelling social satire that has remained popular since it was first serialized in 1837-39." The text for the Modern Library Paperback Classic (shown below) is taken from the 1846 New Edition, revised and corrected by the author. It includes new explanatory notes and an appendix, "A Brief History of the English Poor Laws."