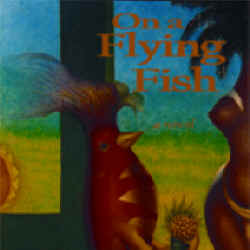 On a Flying Fish

David Applefield's "On a Flying Fish" swoops the reader away on a remarkable journey of language and creation, story and adventure. From Frankfurt to Paris to New York to the Caribbean, this is a novel for anyone who loves travel and values life of the imagination and its secret journey in the heart. Written with the skill of a master craftsman and shimmering with linguistic delights, "On a Flying Fish" is not to be missed!
-- Thomas E. Kennedy, Advisory Editor, The Literary Review

In this wildly imaginative display of storytelling, an obsessive book editor abandons the pressures of his professional life and seeks contemporary Bohemia in the Uber-rational city of Frankfurt accompanied by his enigmatic girlfriend, their barkless basenji dog, and an unpublishable manuscript of questionable origin and multiple voices. What follows is a feisty head-on collision of fiction and reality. Anyone deep in a tortured relationship will love the bittersweet conflict between domesticity and the pursuit of an artful life. Contains passages of very fine writing, brilliant juxtapositions, and deeply moving meditations...
-- Library Journal

David Applefield, fiction writer, editor, and media specialist, has lived in Paris since the early 1980s. He was educated at Amherst College and Northeastern University. He is the author of the highly-praised novel "Once Removed", guide books (Paris Inside Out and The Unofficial Guide to Paris) and editor of the longest-running expat literary journal in Paris, FRANK. He teaches contemporary culture at the Institut d'Etudes Politiques de Paris (Sciences Po), represents the Financial Times in West Africa, and publishes the popular web site https://www.paris-anglo.com. He is currently working on his third novel set in Ukraine.

Listen to chapter 1 of On a Flying Fish: