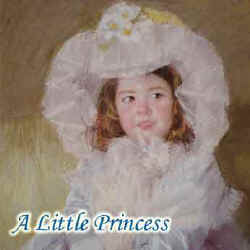 Written by British-born author Frances Hodgson Burnett and first published in 1905, A Little Princess tells the story of young Sara Crewe, privileged daughter of a wealthy diamond merchant. All the other girls at Miss Minchin's school treat Sara as if she truly were a princess. But when Captain Crewe's fortune is sadly lost, Sara's luck changes. Suddenly she is treated no better than a scullery maid. Her own fierce determination to maintain her dignity and remain a princess inside has intrigued and delighted readers for almost a hundred years, even inspiring a recent popular feature film.

Frances Hodgson Burnett is well known for other novels in addition to A Little Princess.  These include The Secret Garden and Little Lord Fauntleroy both of which have been the basis of several movies and television productions.

Audiobooks from Decklin's Domain are provided in PC compatible mp3 format on CD/DVD or Thumbdrive and may be copied for personal use onto your PC and from there to another portable mp3 player or PDA provided there is enough memory. Files are arranged by chapter and you will find that applications such as Windows Media Player and Winamp will play the CDs as will most modern DVD players.  Many portable CD players recognize both regular music CDs and mp3 formats.  No special e-book style program is required to listen to our audiobooks.